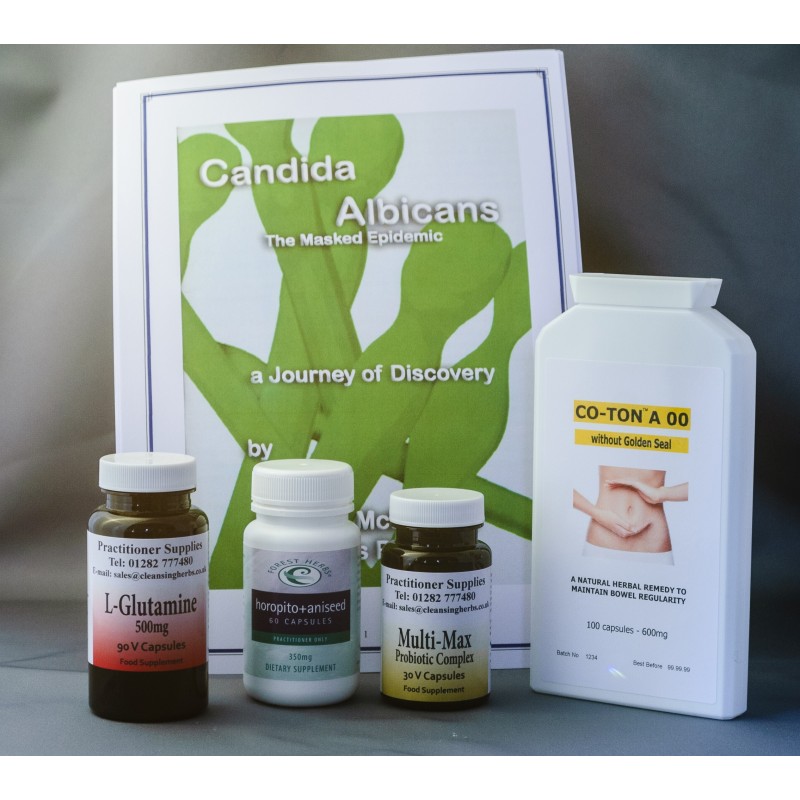 Do you suffer from: * Bloating? * Extreme Tiredness? * Food Cravings?

It could be due to an overgrowth of yeast in your body known as Candida Albicans.

Carry out a simple test - The Spit Test - (details on the Spit Test can be found in the Candida Albicans booklet which is included in this Candida Klear Pack).

Cleansing the Colon It is very important to ensure that the Colon (Bowel) is not constipated as this can become a breeding ground for Candida to flourish. This herbal preparation of Burberry Cascara Ginger Fennel Lobelia, Turkey rhubarb, Cayenne and Raspberry leaf helps to cleanse the Colon and small intestines. Eradicating Candida Overgrowth - Horopito is a traditional Maori herb from New Zealand, it has been used for centuries to treat symptoms related to Candida. A recent New Zealand study found that 76% of sufferers reported an improvement in their symptoms. Contains Horipito leaf (Pseudowintera colorata) 175 mg, Anise seed ( Pimpinella anisium) 175 mg. Replenishing the Colon Pro Biotic - It is essential that good friendly bacteria is taken on the programme. Multi max, acidophilus complex contains 15 billion live cultures at time of manufacture in a vegetable capsules, contains no artificial colouring, additives, free from dairy, yeast, gluten, salt and sugar. Lactobacillius species :- L. Acidophilus 45%, S. Thermophilus 10%, B. Bifidum 6%, B. Longum 3%, L. Rhamnosus 25%, L. Plantarium 7%, L. Bulgaricus 3%, L. Salivarius 1%. Repairing the Gut Wall - It is very important to include L. Glutamine in the Anti Candida regime, to help in the repair and healing of the intestinal tract which is related to leaky gut syndrome.If the gut is not repaired Candida will continue to migrate around the body causing all the recognisable symptoms and conditions. It also helps promote mental activity whilst maintaining acid/alkaline balance. Ingredients L-Glutamine 500mg, DiCalcium 250mg, Cellulose, 80mg, Magnesium Stearate, Silica 4mg, Vitamin B6 1mg. in a vegetarian capsule. L. Glutamine, should not be taken if suffering from cirrhosis of the liver, Kidney problems or Reyes disease.

Candida-Klear -This is a 30 day supply which should be incorporated into an anti-Candida eating regime. Co-Ton - Take two capsules with food twice a day initially for three days then reduce to two capsules once a day. It is important that Co-Ton are taken with food. It may be necessary for individuals who suffer with constipation to take six Co-ton for a longer period of time to ensure that the bowel is thoroughly cleansed. Horopito and Aniseed - Take one capsule twice a day after food followed by a glass of water. Multi-max Probiotic - Take one capsule daily before food. L Glutamine - Take one capsule three times a day between meals the last one to be taken before bed. The Book: Candida Albicans, The Masked Epidemic, A Journey of Discovery - Candida Albicans has been referred to as the 21st Century Plague. It is also referred to as an epidemic by health practitioners in the U.S.A.. who quote as many as 97% U.S. citizens are infected. However, many physicians not only dispute the statistics but they are reluctant to acknowledge that it can cause major health problems. It is, therefore, not surprising that orthodox medicine in the United Kingdom is often dismissive and fails to diagnose Candida correctly.

When Candida is systemic it can cause numerous symptoms which are often treated individually, as in vaginal thrush or digestive problems, with pharmaceutical drugs, which only treat the symptom and not the cause. In its final stages Candida can cause serious illness. Unfortunately, there are no published statistics in the United Kingdom which reveal its true impact on individuals health in the U.K. I envisage that, as it becomes more widely accepted in the U.S.A. through research along with the promotion of anti-Candida herbs and remedies, and more importantly education through the medium of the Internet, Candida will become a familiar word as in the case of irritable bowel syndrome. Candida Albicans will be recognised as a potential health risk. But until that time I want to share with you my involvement and commitment to promoting awareness of Candida and give you the knowledge and motivation to balance and control Candida and consequently to become well. What is Candida Albicans? Candida Albicans is a yeast infection that is present in everyone. In the majority of individuals it doesn'tt cause a problem as it is kept under control by micro-organisms referred to as friendly bacteria. However, when we become ill, our immune system is put under extra pressure as it attempts to fight off the infection. Factors which weaken the immune system are: stress, toxins from the food industry along with hormone preparations, antibiotics, steroids and western diets that are high in yeast and sugars. This results in the yeast changing into a harmful fungal form, which, will flourish in the bowel and occasionally in the mouth and vagina. As it multiplies out of control throughout the body it can cause an extensive range of symptoms. SYMPTOMS AND ILLNESSES ASSOCIATED WITH CANDIDA A host of digestive problems including: heartburn, acid reflux, indigestion, constipation, diarrhoea, excessive gas, abdominal pain, skin rashes including acne and eczema, Psoriasis, dandruff, ear and throat infections, asthma, muscle and joint pain, fungal infections, itching, headaches, migraines palpitations, weight problems, food cravings, food intolerances, menstrual problems, vaginal thrush, PMT, cystitis, endometriosis and feeling intoxicated after a minimal amount of alcohol. Other symptoms include: depression mood swings, irritability, short-term memory loss, lethargy and chronic fatigue after eating, dizziness, anxiety, agitation, numbness and tingling sensations. This is due to toxins, which have been released into the blood stream, which can then travel to the brain causing stress on the nervous system. These and other symptoms are more prevalent in mouldy places, basements, damp climates, exposure to environmental toxins such as insecticides, herbicides, synthetic fertilisers, or after consuming foods that contain sugar and yeast. It is recognised that the symptoms closely mimic those of other chronic diseases. This may explain why Candida is not recognised by the medical profession. If Candida is allowed to travel throughout the body it quickly multiplies growing roots, which are able to penetrate the gastrointestinal tract resulting in undigested food particles and toxins to leak into the bloodstream and liver.This activates the bodys immune system to neutralise the toxic substances, resulting in the immune system becoming overactive, which then can result in allergies and food intolerances, along with degenerative diseases.